The gravitational dance between two galaxies in our local neighbourhood has led to intriguing visual features in both as witnessed in this new NASA/ESA Hubble Space Telescope image. The tiny NGC 1510 and its colossal neighbour NGC 1512 are at the beginning of a lengthy merger, a crucial process in galaxy evolution. Despite its diminutive size, NGC 1510 has had a significant effect on NGC 1512’s structure and amount of star formation.

Galaxies come in a range of shapes and sizes, and astronomers use this fact to classify them based on their appearance. NGC 1512, the large galaxy to the left in this image, is classified as a barred spiral, named after the bar composed of stars, gas and dust slicing through its centre. The tiny NGC 1510 to the right, on the other hand, is a dwarf galaxy. Despite their very different sizes, each galaxy affects the other through gravity, causing slow changes in their appearances.

The bar in NGC 1512 acts as a cosmic funnel, channelling the raw materials required for star formation from the outer ring into the heart of the galaxy. This pipeline of gas and dust in NGC 1512 fuels intense star birth in the bright, blue, shimmering inner disc known as a circumnuclear starburst ring, which spans 2400 light-years.

Both the bar and the starburst ring are thought to be at least in part the result of the cosmic scuffle between the two galaxies — a merger that has been going on for 400 million years.

NGC 1512, which has been observed by Hubble in the past, is also home to a second, more serene, star-forming region in its outer ring. This ring is dotted with dozens of HII regions, where large swathes of hydrogen gas are subject to intense radiation from nearby, newly formed stars. This radiation causes the gas to glow and creates the bright knots of light seen throughout the ring.

Remarkably, NGC 1512 extends even further than we can see in this image — beyond the outer ring — displaying malformed, tendril-like spiral arms enveloping NGC 1510. These huge arms are thought to be warped by strong gravitational interactions with NGC 1510 and the accretion of material from it. But these interactions are not just affecting NGC 1512; they have also taken their toll on the smaller of the pair.

The constant tidal tugging from its neighbour has swirled up the gas and dust in NGC 1510 and kick-started star formation that is even more intense than in NGC 1512. This causes the galaxy to glow with the blue hue that is indicative of hot new stars.

NGC 1510 is not the only galaxy to have experienced the massive gravitational tidal forces of NGC 1512. Observations made in 2015 showed that the outer regions of the spiral arms of NGC 1512 were indeed once part of a separate, older galaxy. This galaxy was ripped apart and absorbed by NGC 1512, just as it is doing now to NGC 1510. 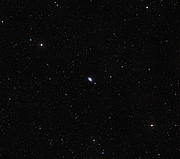