A colourful star-forming region is featured in this stunning new NASA/ESA Hubble Space Telescope image of NGC 2467. Looking like a roiling cauldron of some exotic cosmic brew, huge clouds of gas and dust are sprinkled with bright blue hot young stars.

Strangely shaped dust clouds, resembling spilled liquids, are silhouetted against a colourful background of glowing gas in this newly released Hubble image. The star-forming region NGC 2467 is a vast cloud of gas – mostly hydrogen – that serves as an incubator for new stars. Some of these youthful stars have emerged from the dense clouds where they were born and now shine brightly, hot and blue in this picture, but many others remain hidden.

The full beauty of this object and hints of the astrophysical processes at work within it are revealed in this super-sharp image from Hubble. Hot young stars that recently formed from the cloud are emitting fierce ultraviolet radiation that is causing the whole scene to glow while also sculpting the environment and gradually eroding the gas clouds. Studies have shown that most of the radiation comes from the single hot and brilliant massive star just above the centre of the image. Its fierce radiation has cleared the surrounding region and some of the next generation of stars are forming in the denser regions around the edge.

One of the most familiar star-forming regions is the Orion Nebula, which can be seen with the naked eye. NGC 2467 is a similar but more distant example. Such stellar nurseries can be seen out to considerable distances in the Universe, and their study is important in determining the distance and chemical composition of other galaxies. Some galaxies contain huge star-forming regions, which may contain tens of thousands of stars. Another dramatic example is the 30 Doradus region in the Large Magellanic Cloud.

NGC 2467 was discovered in the nineteenth century and lies in the southern constellation of Puppis, which represents the poop deck of Jason's fabled ship Argo from Greek mythology. NGC 2467 is thought to lie about 13 000 light-years from Earth.

The picture was created from images taken with the Wide Field Channel of the Advanced Camera for Surveys through three different filters (F550M, F660N and F658N, shown in blue, green and red respectively). These data were taken in 2004. 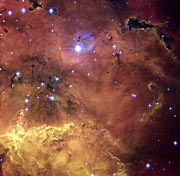 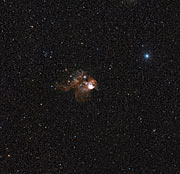