In one of the largest and most detailed celestial images ever, astronomers today unveil the coil-shaped Helix Nebula to celebrate Astronomy Day.

This ESA/NASA Hubble Space Telescope image shows a fine web of filamentary 'bicycle-spoke' features embedded in the colourful red and blue gas ring, which is one of the nearest planetary nebulae to Earth. The nebula is nearby so it is nearly half the size of the diameter of the full Moon. Hubble astronomers took several exposures with the Advanced Camera for Surveys to capture most of it. They then combined Hubble views with a wider photo taken by Kitt Peak's Mosaic Camera.

The result is a breathtaking look down a tunnel of glowing gases that is a million million kilometres long. The fluorescing tube is pointed nearly directly at Earth, so it looks more like a bubble than a cylinder. Thousands of comet-like filaments embedded along the inner rim of the nebula point back toward the central star, which is a small but superhot white dwarf. These tentacles formed when a hot stellar 'wind' of gas ploughed into colder shells of dust and gas previously ejected by the doomed star. Astronomers have known about these comet-like filaments from ground-based telescopes for decades but have never before seen them in so much detail. The filaments may lie in a disc around the hot star, like a collar.

During the November 2002 Leonid meteor storm, to protect the spacecraft and Hubble's precise mirror, controllers turned Hubble's tail end towards the meteor stream for about half a day. Fortunately, the Helix Nebula was almost exactly in the opposite direction of the meteor stream, so Hubble used nine orbits to photograph the nebula while it waited out the storm. To capture the nebula, Hubble had to take nine separate snapshots. Astronomers at the Space Telescope Science Institute assembled these images into a mosaic. Experts then blended the mosaic with a wider photograph taken by the Mosaic Camera on the National Science Foundation's 0.9-metre telescope at Kitt Peak National Optical Astronomy Observatory, United States. The radiant colours correspond to glowing hydrogen and nitrogen (red) and oxygen (blue).

Planetary nebulae like the Helix are sculpted late in a Sun-like star's life by a torrential gush of gases escaping from the dying star. They have nothing to do with planet formation, but get their name because they look like planetary disks in a small telescope. With higher magnification, astronomers can resolve the classic 'doughnut-hole' in the middle of a planetary nebula. Given the nebula's distance of 650 light-years, its angular size corresponds to a huge ring diameter of nearly 3 light-years across. This distance is approximately three-quarters of the distance between our Sun and the nearest star.

The Helix Nebula is a popular target for amateur astronomers. Viewed through binoculars, it appears as a ghostly, green-coloured cloud in the constellation Aquarius. Larger amateur telescopes can resolve the ring-shaped nebula, but only the largest ground-based telescopes can resolve the radial streaks. After careful analysis, astronomers conclude that this nebula is a cylinder that happens to be pointed toward Earth, rather than a bubble.

For broadcasters, animations of the Helix Nebula are available from https://www.spacetelescope.org/videos/?search=heic0307

This image is a seamless blend of ultrasharp Hubble images combined with the wide view of the Mosaic Camera on the National Science Foundation's 0.9-metre telescope at Kitt Peak National Observatory near Tucson, Arizona, United States.

This material is being co-released with NASA (STScI/OPO). 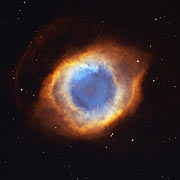 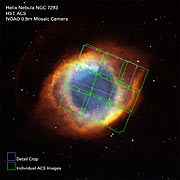 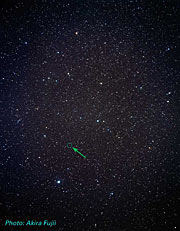 PR Image heic0307e
The Helix Nebula in the constellation Aquarius 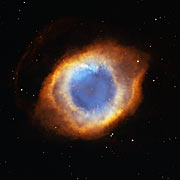